March 16, 2015
Awesome turnout this time at Lightning Developer Week in Chennai. This is our 12th salesforce developer meetup in Chennai and its special event for everyone.Lightning Developer Week is global event, where 100+ Salesforce Developer, User, and Non-Profit groups across the globe will be meeting during Lightning Week to experience first hand the power of Salesforce1 Lightning and we are happy that Chennai Developer group is also part of this global event.

In Chennai, this time more than 100 developers joined and participated in the lightning hands on session.This time the crowd was big, hall with full of energy. This meetup covered the complete lightning kit that developers was eagerly looking forward to learn and get their hands dirty.Lightning is a ground-breaking release of the platform to easily build apps fast and easy

Shivanath, gave a presentation on Lightning topics. Developers had many questions and shivanath answered all the questions. Thank you so much Shivanath. All attendees participate in the Hands on session tutorial. People with serious faces :) got their hands dirty and built an app using lightning concepts. All the developers left the hall with the Lightning app, goodies and new friends. Almost all participants got Lightning Developer Week lightning special edition t-shirt. Happy that developers are established their social connections during the break and it was a good networking. 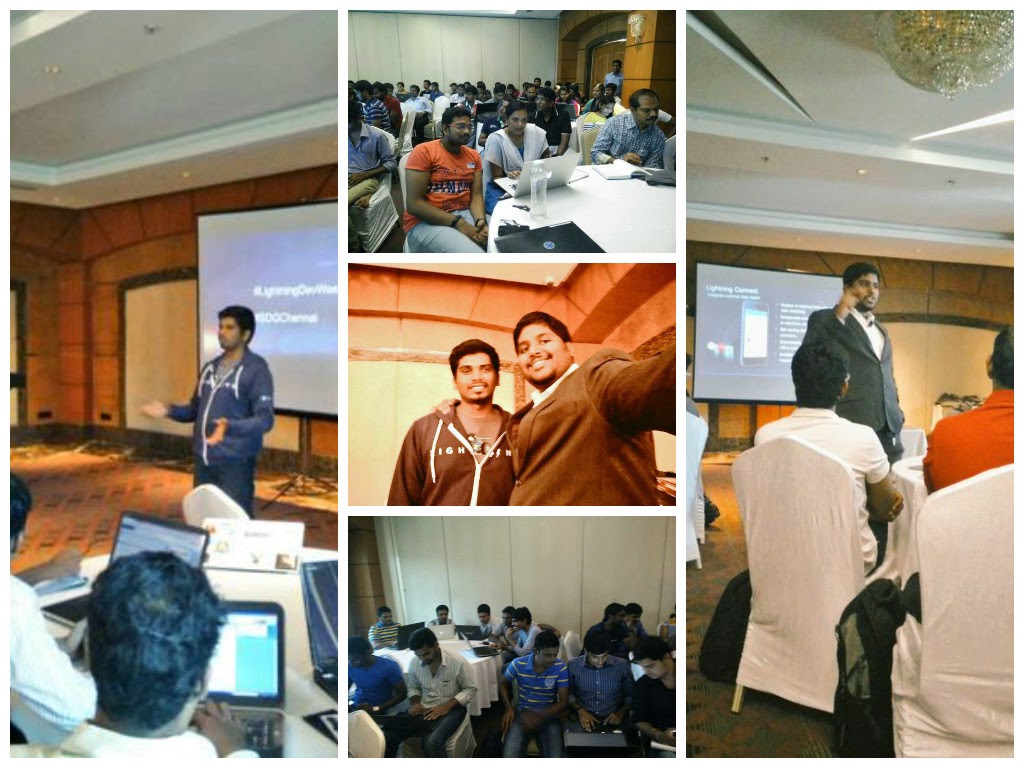 Our Chennai developers are so enthusiastic and they thundered about lightning meetup over twitter using hastags #SDGChennai and #lightningdevweek and many won the twitter challenges we conducted. Glad to see that developer community in Chennai is growing fast.

A very big thanks to Salesforce team for all their efforts to bring this latest release to all the developers and giving us a chance to learn and explore. Kudos to the team behind the workbook tutorial content. They really did fantastic job in preparing the content,its really helpful for everyone.

Special thanks to April Kyle Nassi for her support and guidance and thanks for the lovely salesforce goodies which every developer loves to have it. Finally a big thanks to all developers who joined the meetup and made this event a big success.